Darkness creeps into every story and touches every life in different ways, but one common thread remains… no matter what shade it’s always dark.  After participating for 7 years in a community equestrian program, Dale and Amy’s oldest daughter, Rachael, became severely ill from toxic exposure to mold.  Subsequently, severe head trauma advanced her ailing condition causing Rachael literally to fall into isolation.  Her ability to process visual and auditory information failed.  As her dreams to ride in the program's highest division shattered, this 15 year old was forced to retire from her involvement and fight for her recovery.  The world became deafeningly silent and blindingly dim.  However, months of physical pain and disconnect became a doorway into secret wealth and hidden treasures.  Out of this dark season, she found the strength and freedom to hope for her future.  Her budding desire to have a ranch for hurting children and hurting horses watered a tiny seed of hope, buried deep where no light or water had never invaded. 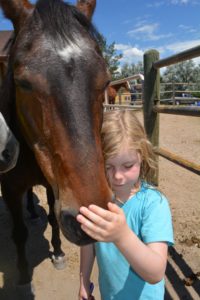 Through a series of divine connections the Eben family discovered a program for kids and horses in Oregon called Crystal Peaks Youth Ranch (CPYR).  Combing the CPYR website, tears filled their eyes as they found the prototype of the burning dream in her heart. Just months later, the whole family volunteered for a week at Crystal Peaks, a profound experience that confirmed and inspired their dream. Dale and Amy returned for an informational meeting in June 2015 to pursue creating a similar program here in Colorado.  Although Rachael remained in the peak of her medical battle, God accelerated the provision of a ranch of their own, inviting them to settle on a beautiful 10 acre parcel with a panoramic view of the Continental Divide in Castle Rock, CO.  Joined by their 3 children Rachael, Joshua, and Levi, and Dale’s parents, Deborah and Dennis, they all relocated, armed with the passion to Rescue, Redeem, and Release.

In the beginning days of operation, they rescued three horses and began witnessing the full restoration of each one.  As their daughter faithfully cared for these broken animals, miraculously she also began to heal.  Rescue is just the beginning.  Healing, empowering, and redeeming are all necessary for the fullness of release into Kingdom design.  They believe wholeheartedly in the power of redemption for both horse and human. Established on faith in new beginnings, 8th Mountain Ranch creates an atmosphere for the richness of God’s unconditional love to be expressed. It is their lofty purpose to provide children, horses, and families with an opportunity to encounter hope, encouragement, acceptance, and ultimately transformation.   Even though many lives are touched by a common thread of darkness, the light filled presence of Christ descends into that dark place, enabling us to recover our wholeness.  Propelled by compassion to bring life and hope into dark and desperate lives, 8th Mountain Ranch believes new beginnings are possible for everyone!

We’re Moving! To learn more about the recent changes at the ranch, please view the April 2018 newsletter. Due to the process of relocating, we will not be scheduling sessions at this time. Please look for an update on our new location and hours of operation. Thank you for your patience while we transition into our New Beginning!Read Announcement